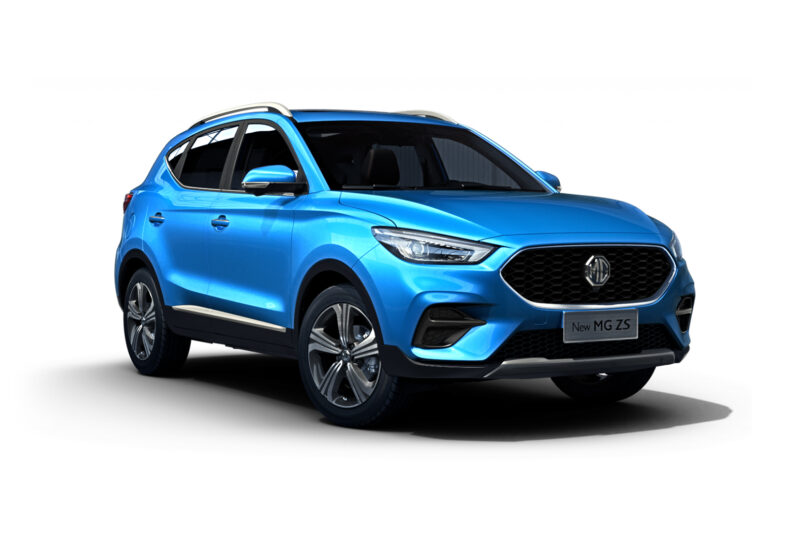 MG Motor is delighted to announce the launch of New MG ZS, a fantastic evolution of its best-selling B-segment petrol SUV. On sale from 1st July 2020, New MG ZS brings a real uplift in specification and quality to the already successful model, whilst maintaining its keen value-for-money positioning.

Originally launched in November 2017, MG ZS has been on the market for just over two and a half years. During that time, it’s become MG Motor’s biggest selling car to date. Focusing on value-for-money motoring, MG ZS captured the imagination of buyers seeking a spacious, family-friendly car, packed with technology yet kind on the pocket. MG ZS was also the first MG ever to be offered with a comprehensive 7 year warranty, a strength which is now enjoyed by the whole MG range, confirming the brand’s confidence in its manufacturing quality and reliability in use.

New MG ZS retains all the strengths of the out-going car but adds a number of design and technology features which take New MG ZS to the next level in terms of specification and value-for-money. Reflecting the fact that almost all MG ZS buyers opted for the higher-spec versions, New MG ZS is available in just two well-equipped trim levels; Excite and Exclusive.

MG is once again leading the segment in terms of value-for-money motoring, with the nicely appointed Excite version starting from just £15,495 OTR. Initially available in manual transmission only, automatic transmission versions will be launched later this year.

New MG ZS has evolved for life, with the key changes being:

With extensive changes made to both the exterior and interior of the car, getting to know New MG ZS will be as much of a pleasure for existing MG customers as it will be for new ones.

Daniel Gregorious, Head of Sales & Marketing at MG Motor said, “New MG ZS is a fantastic evolution of our most successful car to date. With an exciting new look, great new technology and a quality new interior, New MG ZS takes our B-SUV to the next level. The fact that we’ve managed to do all this and still enhance the value proposition is staggering, and I would like to pay tribute to everyone within our business who worked so hard to make it possible. We know that existing MG customers will want to visit our showrooms to find out more, and new customers will be attracted by this great new package”.

New MG ZS is available to order now from your local MG dealer. MG has a nationwide network of 110 franchised dealers in the UK, and customers can find their local dealer at MG.CO.UK

Starting with the exterior, New MG ZS boasts a new front face which is at once familiar and also brand new. The stylish stellar field grille of the out-going model has evolved into a strikingly handsome hexagonal grille which provides great road presence and perfectly frames the famous MG logo. The full LED headlamps sweep back towards the wings, and the overall impact is to create a front end which looks lower and sportier than the previous car. An aluminium-effect lower grille and fog-lights on the top-of-the-range Exclusive version complete the look.

Moving around to the side, New MG ZS receives modern, newly-designed 17” alloy wheels in two styles depending upon the version. The Excite’s wheels bring a sense of energy with their five spokes each appearing to split into three directions. The Exclusive’s Tomahawk wheels evoke dynamism, with the five spokes cutting the air, appearing to be in motion even when stationary.

At the rear, more extensive use of colour coding adds to the more sophisticated feel of New MG ZS, with the evolution into a more crossover-style design completed with a new aluminium-style trim and refreshed taillights.

Inside, New MG ZS features a stylish new dashboard design with more soft touch materials than ever before, finished with detail stitching. The central 10.1” floating colour touchscreen is the centrepiece, featuring DAB radio, Bluetooth telephone and music streaming, Android Auto and Apple CarPlay, with Exclusive versions also including iGO satnav and 360 degree reversing camera. A series of fashionable piano key buttons are arranged beneath the floating colour touchscreen, giving easy access to the air conditioning and other comfort controls.

New MG ZS remains a global car with a distinctly British feel. New MG ZS has been tested on UK roads and developed for UK drivers with MG’s Engineering team based at Longbridge, Birmingham, leading the way. All versions come with three power assisted steering modes – Urban, Normal and Dynamic – which are designed to give the driver complete control over their ride. While Urban steering offers a lighter and quicker response at low speeds and when parking, the Dynamic mode is designed to increase the steering effort, deliver a higher damping effect and increase the centre definition at medium and high vehicle speeds. The Normal steering option delivers a great fit to MG’s tailored suspension set-up and vehicle dynamics response, for drivers who want to maintain a consistent ride. Available with a 1.5 DOHC VTI-tech, four-cylinder engine with a smooth and responsive five-speed manual gearbox, New MG ZS meets the latest emissions standards and can move from 0-62 mph (100 km/h) in 10.9 seconds. Combined fuel consumption on the latest WLTP cycle is 41.4 miles per gallon.

With one of the most generous shoulder, leg and headroom capacities in its segment, New MG ZS offers a comfortable travelling experience for driver and passengers alike – providing around 55mm additional rear shoulder room and 80mm rear headroom than the segment average. An incredible 448 litres of boot capacity (some 60 litres larger than the typical B-SUV) – plus a split-level boot – provides plenty of room for prams, luggage, outdoor leisure equipment or the weekly shop, while keen cyclists and adventure sports fans will benefit from numerous compartments throughout the car which provide additional storage.

Coming with one of the longest fully transferable warranties in its class, New MG ZS offers a 7 year/80,000-mile warranty as standard. Testament to MG’s confidence in the quality of its design, engineering and manufacturing operations, this industry-beating warranty sees MG back up its promise of product quality and reliability.

We use cookies on our website to give you the most relevant experience by remembering your preferences and repeat visits. By clicking “Accept All”, you consent to the use of ALL the cookies. However you may visit Cookie Settings to provide a controlled consent.
Read MoreCookie settingsAccept All
Manage consent

This website uses cookies to improve your experience while you navigate through the website. Out of these cookies, the cookies that are categorized as necessary are stored on your browser as they are essential for the working of basic functionalities of the website. We also use third-party cookies that help us analyze and understand how you use this website. These cookies will be stored in your browser only with your consent. You also have the option to opt-out of these cookies. But opting out of some of these cookies may have an effect on your browsing experience.
Necessary Always Enabled
Necessary cookies are absolutely essential for the website to function properly. These cookies ensure basic functionalities and security features of the website, anonymously.
Functional
Functional cookies help to perform certain functionalities like sharing the content of the website on social media platforms, collect feedbacks, and other third-party features.
Performance
Performance cookies are used to understand and analyze the key performance indexes of the website which helps in delivering a better user experience for the visitors.
Analytics
Analytical cookies are used to understand how visitors interact with the website. These cookies help provide information on metrics the number of visitors, bounce rate, traffic source, etc.
Advertisement
Advertisement cookies are used to provide visitors with relevant ads and marketing campaigns. These cookies track visitors across websites and collect information to provide customized ads.
Others
Other uncategorized cookies are those that are being analyzed and have not been classified into a category as yet.
Save & Accept
Powered by